Staring at your brew house walls isn’t a common activity during a busy brewing day. Keeping a track of spilt malt, beer dregs and cask rinses are often as much as can be managed between mashing in, vessel cleaning and record keeping. However, the brewer’s environment and wall mycology can spell problems not only to your premium product but to health and fitness.

One brewery by-product is particularly instrumental in developing long term issues – steam. Not just due to its immediate potential for scalds but its contribution to condensation and microbial growth. Steam is inevitably released from mash tuns and coppers misting the air and even creating a dense fog throughout the whole premises. While easily minimised by stacks, vapour condensers and ventilators some steam inevitably condenses on walls and surfaces leaving moisture to penetrate and saturate.

Such surfaces can offer perfect conditions for microbes, especially mould, to grow and contaminate beer. In fact the fabric of many breweries are ideal for microbial colonisation. Not just wood and brick but plaster board for example has two layers of cardboard compressing a sandy centre. For moulds normally associated with growth on sandy soil this is a home from home – and with added warmth.

Not all such fungi appear as moulds. Some, occasionally seen on ceilings after a bath overflow, can develop small dish-like bodies to further spread spores. In breweries these may appear unnoticed in dank corners lurking for months whilst the underlying material is gradually corroded.

More serious corrosion may occur with wet rot and dry rot fungi – shown below. Dry rot is especially pernicious as it can produce threads to penetrate brick and mortar in search of wood and new areas to colonise. Floor joists are a common weak point leading to the whole floor collapsing below your feet. Considering the weight of full brewing vessels this is not a remote possibility. 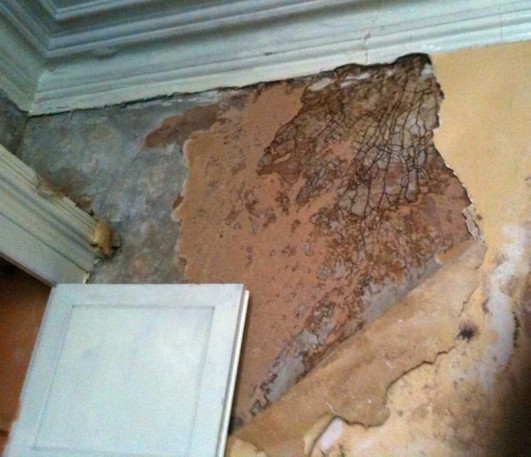 Contamination hazards to beer from moulds are, fortunately limited as most are aerobic and won’t develop in packaged beer. They may, however, harbour populations of bacteria which are less fastidious and rapidly sour your product. A specialism of moulds is their very light spores adapted to easily disperse in air draughts. Carrying bacteria these can be a major contamination source – and worth the investment to check their levels in the air of your working areas.

A more pernicious problem with moulds is their ability to cause allergies to your workers. A small proportion of the population is allergic to fungi in general but breathing in mould spores can exacerbate or initiate this producing a condition now defined as sick building syndrome or SBS. Rhinitis, difficulty in breathing, headaches, flulike symptoms, and watering of the eyes are typical features of SBS leading to nausea, poor attention and distraction from brewing operations.

Of course, nausea can develop in many conditions in any job but SBS onset is typically a feature of specific locations and can be tested for typical fungal exposure. Other examples of the condition have been observed in schools and offices with poor maintenance or after flooding, as for example after hurricane Katrina in New Orleans. In some cases, penetration of the structure may be so deep the whole building requires replacement – not a desirable outcome for a new brewery structure.

Penicillium and Stachybortys species have been implicated in SBS appearing as green or black surface discolorations and spreading colonies. Penicillium species are one of the most common moulds. They appear green when mature and produce prolific spores which coat surfaces in a fine dust. 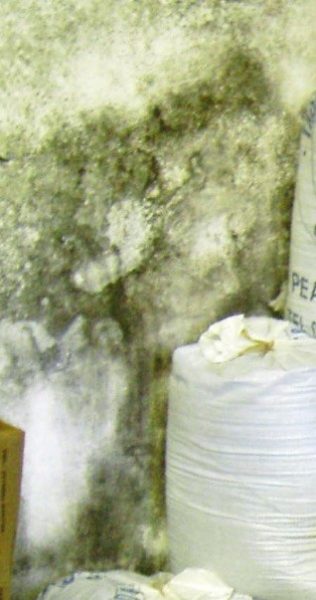 Stachybortis is affectionately known as black killer mould on account of releasing mycotoxins which can result in a wealth of neurological symptoms from shortened attention span and confusion to depression and seizure. Moreover, symptoms develop slowly with time and as a building becomes increasingly contaminated. A fresh new building may be a great motivation to your enterprise but slow accumulation of surface mould reduces your enthusiasm and focus.

A close look around some breweries illustrates the factors leading to mould establishment. Steam for sure but also poor ventilation and crowded working conditions. Low ceilings may make a pub cellar brewery attractive but are also perfect for mycology. Minimising the potential for mould growth is thus best managed through your initial design rather than relying on active maintenance. Smooth surfaces which cannot provide substrates for fungal growth are desirable with wood and plaster elevating levels.

To test your conditions an air sample can be taken on an agar plate and incubated to view the colonies developing. Indoor airs can contain up to tens of thousands of spores per cubic meter with higher levels in older, uninsulated buildings. 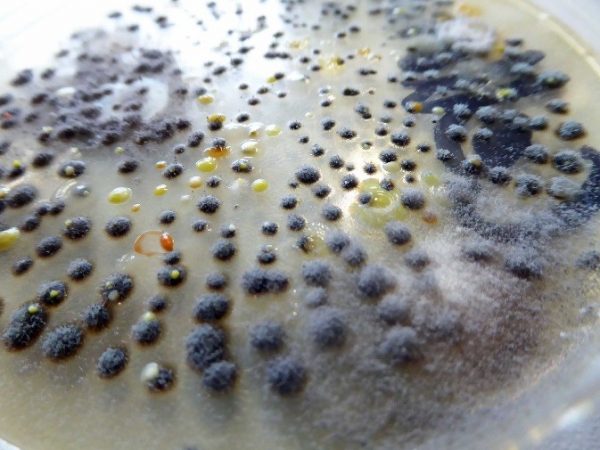 Bleach will kill surface material but spores have evolved to be resistant to toxins, stress and heat. Using scouring to remove surface growth will drive spores deeper and embed them further. Anticipation and prevention is a better target than working backwards to identify the cause of symptoms in brewery staff or specifying “sick building” on their sick note.