Science in the Brewery

What use is science in brewing beer? Isn’t it just like cooking – follow a recipe and bottle the result?

In some cases brewing can be like a formula. Take some malt, extract the sugars and ferment them to beer. Almost a bit like making jam or bread.

However, there is a lot of biology in managing each stage. And chemistry and physics and even maths to do the recipe and statistics to assess efficiency of production and quality of the beer made. You can ignore it if you know the process and which valves to twist or heaters to turn on.

However, if you get into problems you need to know how to save the brew and this may mean changing the temperatures, adding more water, or malt or hops. It may mean testing the yeast in the laboratory or analysing the beer for bitterness, or pH or, of course, for alcohol levels.

Science is also relevant if you are looking to develop new recipes because you need to calculate the level of ingredients and to know the effects of different yeasts, different fermentation conditions and anticipate the flavours produced by the fermentation.

Here’s a couple of examples.

Beer differs from wine because it contains residual sugars. Wine is produced from fruit juices which generally contain easily fermentable sugars like glucose and sucrose. As a result there is little if any sugar left and the wine is dry and acidic.

Beer however, is slightly sweet because it is produced from barley starch rather than from fruits. Barley starch is a complex polymer of glucose units in a long chain. It is not fermentable by yeast and must be digested to simpler sugars first. This happens in the mash tun where the crushed barley malt is mixed with liquor (brewing water) at between 60 and 70oC. At this temperature the amylase enzymes which digest starch are most active. They digest long chains of glucose into shorter chains, particularly glucose itself, the disaccharide maltose and the trisaccharide maltotriose. These are all fermentable by yeast and so allow alcohol to be produced.

Not all the starch is digested though. Some starch chains are branched and these branching bonds cannot be broken by the amylases in the mash. These dextrin chains account for about 25% of the sugars produced by mashing and because they are long chains they cannot be fermented. Beer thus contains residual sugars which give both sweetness and mouthfeel to the beer making it different from wine.

Where’s the science? Well apart from understanding the process it is necessary to control it carefully to avoid serious problems and missing the specification of the beer. For example enzymes operate best at an optimal temperature – for barley amylases this is between 60 and 70oC. If the mash temperature rises too high, above 70oC, the enzymes will be denatured and little starch will be digested. The beer produced will not only contain little alcohol because there will be few fermentable sugars available but will taste pretty terrible being full of starch. Alternatively if the temperature is too low, below 60oC the enzymes will not work effectively and only limited sugars will be produced again.

In a final complication these two enzymes have different pH optima so the brewer must manage more than just the heating system but the chemistry of the liquor to obtain the target beer.

Fermentation is conducted by yeast cells which convert simple sugars (glucose, maltose and maltotriose) into ethanol and carbon dioxide. This is an inherent part of their metabolism and will occur soon after yeast are pitched into the sugar solution (known as wort) produced by mashing.

However, fermentation requires the yeast cells to be in good condition and with all the enzymes and internal structure necessary to conduct the relevant reactions. In many cases brewers keep yeast from one brew to another so passing on the same strain and keeping consistency of flavour. (Yeast strains differ in the flavours they produce so each brewery needs to use the same strain in order to keep the beer consistent).

Brewers do not necessarily brew every day and keeping yeast for many days may lead to the cells dying. It is thus necessary to check the yeast before use in case the viability (% of cells alive) is too low (<90%) to conduct a good fermentation. It is impossible to judge this from looking at the yeast in a bucket so brewers use a microscope to see the cells themselves.

Under the microscope the cells typically appear oval and should have internal contents visible – nucleus and vacuole particularly. However, it is still hard to tell if the cell is in good condition or not. To do this brewers use the dye methylene blue which can be changed from blue to colourless by reduction reactions. These reactions are common in active cells. As a result live cells will be colourless but dead ones will stain blue.

All the brewer has to do is thus count the number of blue and colourless cells and determine the percentage. If over 90% then the yeast can be used, if lower then it should be discarded.

An example of the appearance of these cells under the microscope is shown below. It is clear to see which cells are alive and which dead. 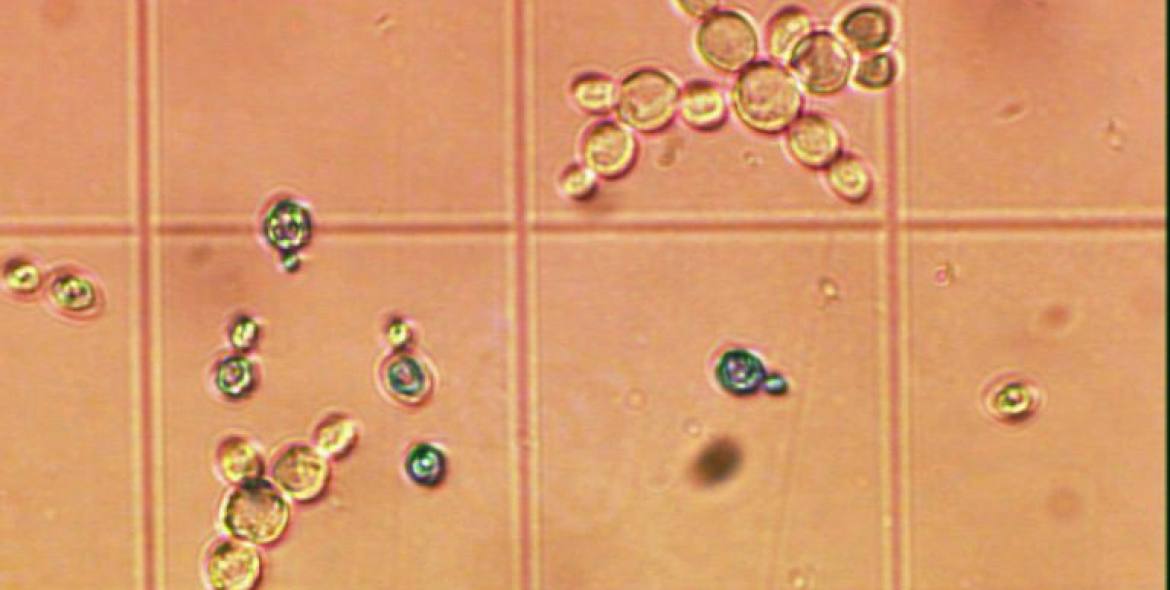 OK so these are specific examples. How common is science in brewing. Lets take a brewing day and see where the science appears.

Measuring the materials. We need to use accurate weighing to be sure that the recipe is followed exactly. Some materials such as malt are weighed in tons and others like hops in kilograms. Salts, however, are used in gram quantities and need careful attention as they affect the brew pH.

Managing the mash. Temperature and pH are particularly important and need careful checks. Samples may be taken and the pH and the gravity of the mash determined to make sure it matches the target.

Boiling the wort. Boiling with hops extracts the bitter flavour which is characteristic of beer. To test that the extraction is efficient samples may be taken and tested in a spectrophotometer at a uv wavelength. The boiled wort may also be tested for protein as too much may make the beer hazy.

Cooling the wort. This is easily done in a heat exchanger but oxygen is needed at this stage to help the yeast ferment. Measuring the level is critical as too much may harm the yeast.

Fermenting the wort. As well as testing the viability of the yeast the gravity of the wort is regularly tested to check that the yeast is active and that the fermentation is proceeding to target. The pH may also be checked and samples observed in the microscope for any contaminating bacteria.

Packaging. When beer is packaged it must be kept away from oxygen which would cause stale flavours. It must be packaged hygienically to prevent contamination and regular tests are made to check that bacteria and wild yeasts are not present on the equipment or in the beer. If they are the beer may be destroyed.

Cleaning. Cleaning happens continually in brewing to ensure that any residues are removed before microbes grow. Formulating the cleaning system requires a knowledge of how microorganisms may be killed by antiseptics.

As you can see a knowledge of science is essential and brewers either gain this in training or by instruction in the brewery. A small brewery may not require more than a general understanding but a large brewery would need advanced qualifications – either a diploma or a degree particularly for a job as a brewer. Assistant brewers may be recruited with A level or BTEC qualifications but would be expected to obtain professional qualifications.

Biology, chemistry and physics are all relevant subjects as is a basic ability with mathematics. Today breweries do look for some science ability but are also keen to train brewers directly in the required techniques and knowledge. Industry qualifications are relevant and mostly co-ordinated by the Institute of Brewing and Distilling (www.ibd.org.uk) which provide certificate, diploma and master brewer awards.

For more details on brewing theory and processes try these sites also.