The effects of under-pitching your yeast are well known – slow and incomplete fermentations, contamination, customer complaints and lost income. But what of the effects of over pitching? Moreover, how much less is insufficient and how much more is excessive?

Traditional target pitching rates are expressed technically as ten million cells per ml. A difficult concentration to measure easily in small scale production and impossible without a microscope or a sophisticated yeast monitor. More manageable is a rate of a pint a barrel of standard yeast slurry cropped during active fermentation. If you use continental measures this equates to around 3.5 ml per litre of wort.

Achieving this pitching rate is susceptible to a wealth of inaccuracies. Microscope estimations of yeast slurry are a nightmare when yeast is strongly flocculated making it impossible to count clumped cells. On the other hand a jug of yeast slurry not only contains yeast but also precipitated trub of unknown amounts which may differ according to the beer brewed, the protein in the ingredients and the efficiency of the mash and boil.

Moreover, even an accurate yeast count is only valid if you know the viability of the cells. A sample only 70% viable needs a higher dose to make up for the dead cells – in this case another 430 ml per litre. Additional yeast is also needed for higher gravity beers – as a general guide levels of 0.75 million cells per degree plato (or 4o gravity) are recommend.

At this rate you will need around 30% more per 10% increase in degrees of gravity depending on your yeast strain.
No wonder fermentation can vary so much from brew to brew and from week to week.

Even using packet dried yeast is no guarantee as viability is unlikely to be 100% – dessication being a pretty stressful experience even for robust yeast cells. And if you keep a packet for a number of brews beware of further reduced viability as moisture and oxygen stress and kill more cells. A simple check with some methylene blue will allow you to determine viability as shown below. 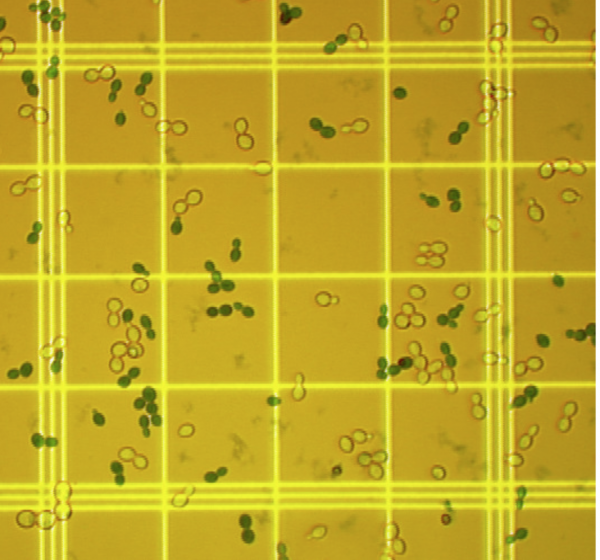 However, some of this is scaremongering. Practice can make perfect and if you have strict control over your cropping or your rehydration of dried cells along with a consistent storage a target band of yeast counts can be achieved.

The question of over pitching does remain as mistakes can occur. As one example take the case of two brewers working on the same beer but different lunch hours. Each pitched the wort before their lunch not communicating their action to the other. When tasted during fermentation and later in trade little difference was found to the expected profile. However, in this case potential problems were mitigated by racking the beer immediately after fermentation to minimise contact with the excess yeast.

High levels of yeast are associated with off flavours, particularly yeast bite when the cells autolyse and release their contents. Meaty flavours are typical in this case providing lingering harsh aftertastes. In addition, high levels of yeast autolysis can increase beer pH affecting your beer’s shelf life.

Overpitching does, of course, produce more yeast in suspension which is likely to result in faster fermentation – albeit within limits. These limits are bound by the changes in metabolism associated with dense yeast suspensions and which can also change beer flavour often with an increase in fusel alcohols and diacetyl. As a general rule an increase of two or three times normal dose is unlikely to ruin a beer. An increase of five or ten times is likely to give you a different beer entirely.

In addition, it may produce a larger head crop depending on the strain and conditions. 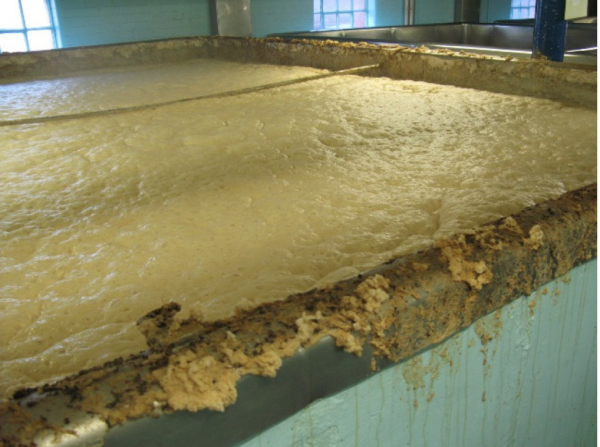 One feature of yeast dosing is that higher concentrations do not necessarily lead to higher final yields of yeast – unless you oxygenate continuously. High concentrations of yeast reproduce at a lower rate leading to less growth while the cells focus more on metabolism.

One area of interest in high yeast counts is in the application of continuous fermentation where high concentrations of yeast, of hundreds of million cells per ml, are immobilized within the fermenter. Wort is then pumped through to be progressively collected as beer. Immobilized fermentation has been attractive to large scale brewing for decades due to its potential to reduce fermentation times. However, it is yet to break into main stream production particularly because of the flavour issues noted and because it is difficult to keep the cells forever young or stop buds being released into the wort.

To date continuous fermentation is most successful with low alcohol and light beers generally and as a means of speeding maturation by accelerating diacetyl reduction.

This is not to say that it may have application in small scale brewing if future innovations are developed. In which case high yeast concentrations may become the norm for the technical brewer where wort flows continually through a heavily pitched fermenter and continually to the bar.

For the more traditional craft brewer control of pitching levels is another element of the brewer’s skill to proudly acclaim in promotions and bar room discussion.