A lively and active fermentation is an essential in brewing good beer. Too slow and microbial contaminants can dominate, wort oxidises and tastes stale. Too fast and flavours may be unbalanced.

A major factor affecting fermentation speed is the number of yeast cells present. But how much is actually needed, and how can you judge the addition?

In some cases this is easy to dose. Packet yeast for example has recommendations for addition, although this may need adjusting for your own worts. Yeast slurry, however, has no paperwork and needs more careful assessment. In the case of slurries from previous brews this is a very unknown element. One we often judge by experience but also variable due to the hazards of the different conditions in each brew.

Laboratory and brewery experiments suggest that at least 10 million cells are required per ml at pitching. However, this is for a moderate gravity beer around 1040 and more will be needed in stronger worts. This is partly due to the effects of a thick wort in stressing yeast cells but also because oxygen is less soluble in stronger gravities. In general wort only has 75-80% the oxygen saturation of water.

Counting these out is possible if you have a microscope and a counting chamber. For most breweries all that time and resources allow is to correlate this to a volume of yeast slurry. The general rule here is that half a litre of thick yeast slurry per 100 litres will give approximately 15 million cells per ml. This is approximately 800 ml per barrel. Of course slurry varies in thickness from brew to brew so it is worth looking to crop consistently from one beer which has the most regular processing.

It is also important to avoid cropping from a brew with problems and from very old compacted yeast. Cells shrink with time of storage and more cells will be present per ml of pitch. However, smaller cells are less viable and more likely to die and release yeast bite flavours. In fact assessing cell size is one way to judge pitching quality although only really worth while if you have an image analysis system coupled to your microscope.

At a more basic level higher pitching rates are needed at lower temperature fermentations, possibly twice as much for a 1080 wort. Lagers are thus more demanding than ales which tend to be fermented at high temperatures. Similarly it may be judicious to pitch higher levels in winter if there is a possibility of wort cooling, particularly early and late in the fermentation.

The change in solubility with temperature is shown in the graph below which indicates a 20% decline between 10 and 20oC. 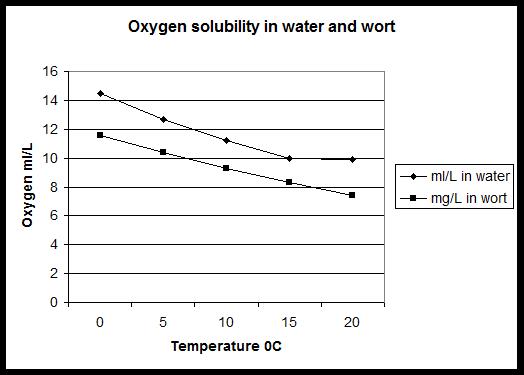 Low yeast counts at pitch typically result in fermentations taking a long time to start gravity fall – a not uncommon problem when a new batch of culture yeast is used. Such problems may be compounded if the wort is poorly aerated, too cold or has limited nutrients – perhaps from overuse of adjuncts. While judicious use of rousing, temperature control and nutrient addition may drive such a fermentation to its full course it would be inadvisable to repitch from its crop and such yeast may be of poor quality.

At high levels fermentations will be rapid. However, can they be too rapid? Certainly excessive yeast may produce more yeast bite flavours at some point in the process. If you accidently pour a full packet of yeast or double the dose of slurry try to rack the beer off the yeast early and continue fermentation in a separate vessel so as to minimise the yeast contact later in the process.

Other effects of high yeast pitching include lower bitterness as yeast cells adsorb hop iso alpha acids. There may also be higher levels of standard fermentation flavours including esters and higher alcohols.

Finally, overpitching can result in a curtailed fermentation if the wort is so active as to throw most of its yeast out of the fermenter. Such boiling worts may also depend on growth and flocculation factors from malt to be present but can result in a more yeast on the floor than in the tank. Over filling fermenters can contribute to this so a general lesson might be said to be “less is more”. Certainly less can be easier to manage.