Copper In Your Kettle

What’s so difficult about boiling? Turn on the power and have a cuppa, dig out the mash or catch up on your invoicing. Once boiling your wort is on its own isomerising hop resins, evaporating oils and stabilizing haze giving you 60 minutes of relaxation in a busy brew day. As long as it’s a foaming, rolling boil your time’s your own.

Apart from the time for hop additions this is true enough. However, the effectiveness of your boil’s performance depends strongly on your initial choice of kettle design, your fuel source and maintenance. Once chosen your beer will carry features of your boiling style and may limit the range of beers you can produce.

One of the most basic kettles in use is that in the shearing shed of a Norwegian farm. Used infrequently and only 200 litres in volume this blackened and battered copper tub produced a fierce boil and clean wort break, better than many you might see in commercial production. Inherited through the family the boiler was at least 100 years old and functioned perfectly due to its copper origin and the clean flame produced by the spruce wood below.

Today few kettles are actually copper. True, some have a copper cladding to provide an additional polishing chore to the brewer but the basic structure is commonly stainless steel. The arguments for this are cost, ease of manufacture, strength and resistance to cleaning agents. Copper on the other hand is expensive, requires more care in construction and, being softer, likely to scratch more easily. In addition, it dissolves – slowly – into liquids of low pH such as your wort and could produce hazardous levels which can lead to Copperiedus poisoning.

Physically, the big advantage of copper as a heating surface is high thermal conductivity and a more wettable surface than stainless steel. Being easier to wet means that smaller gas bubbles are produced, wort is heated faster and the boil is more effective. The smaller bubbles also encourage faster trub flocculation because of their greater surface area. 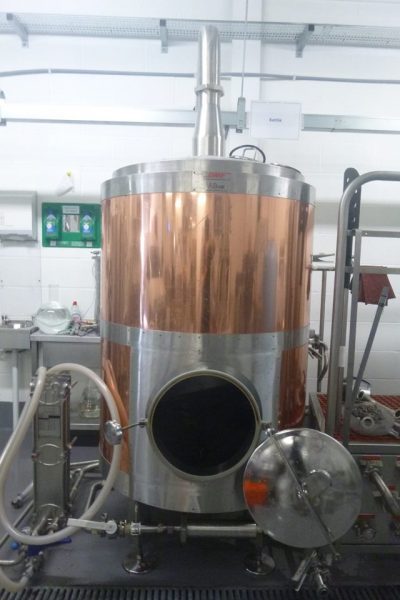 Relatively few brewers use direct heat on their vessels today but if you do then your efficiency may be limited, particularly as some of the heat is likely to leak into the surroundings. Gas burners firing into an internal tube will be more effective and distribute the heat in a targeted manner.

Using your heat effectively is as important as supplying enough of it. Simply simmering your wort is a poor approach to boiling. Agitation is necessary to ensure a clean break of trub and won’t be best achieved by a simple bubbling. Kettle design aims to maximise agitation and ensure that enough molecular collisions occur to produce the large trub flocs needed to clarify wort rapidly.

One of the most effective designs to achieve this is for the wort to be heated below a wide tube in the centre of the kettle. This directs a fountain of wort upwards onto an inverted cone which sprays it back into the copper. Effective but also expensive and thus not a common feature in smaller kettles. Here agitation is more commonly achieved by positioning the heating surface to one side of the copper. As a result, wort is thrown to the other side and produces a rolling boil with good mixing.

Other sophisticated designs to achieve the same include kettles with sloping bottoms, motorised agitators or external heaters with pumped wort delivery.

Whatever the design the end result of your efforts should be a wort with maximum conversion of α acids, suitable aroma balance and rapidly settling flocs of trub. Of these, isomerisation is the easiest to achieve being the most rapid reaction and generally complete within 30 minutes.

Flavour balancing is a different concept and provides a major signature of your production plant. Volatile flavours will evaporate rapidly leaving others to dominate. The exact balance will reflect the release of steam during your boil and any possible condensation back into the kettle. In a well- designed system the undesirable sulphur flavours from the malt will disappear along

with many hydrocarbons from your hops. Differences in overall flavour balance will depend on other ingredients but a common character may be reflected in your beers as a result of just how your kettle performs.

Differences may also arise from day to day changes to the system, the most relevant being cleaning effectiveness. For this most attention is necessary to the heating surfaces themselves. Boiling wort inevitably leaves hard deposits where heat was strongest. Such deposits have poor heat conductivity and reduce the effectiveness of the next boil. Forget to clean your elements and your beer flavours will change – and your power bill increase.

Are there any other features which traditional brewing may advise today’s production? Perhaps the even earlier approach of using hot rocks to heat work is one area worth exploring. We may know plenty about the influence of copper and stainless steel on beer character but what of granite, sandstone and other rocks? Steinbier is a speciality in Germany and could add another dimension to UK products. Scalding your brew may sound extreme but might give just that extra taste for a novel market. Persuading your brewer to juggle red hot cobbles into the top of the kettle may be different matter.