At a Distance: Managing Beer in Transit

What’s worse than hearing about a problem beer? Hearing about one a hundred miles away. Problems of clarity, contamination or condition in your local pub are a manageable irritation. At least you can easily replace a cask and assuage the publican.

When your beer is in some unknown outlet at the end of a wholesale chain rectification becomes difficult. In many cases you don’t even know there is a problem until the cask is returned part, or almost wholly full. Even if a concerned publican does phone you for advice – or abuse – there is very little you can do to produce better beer by the morning. Calls from a distance are particularly worrying.

In some cases you may know of the problem from seeing it in local trade and be able to judge whether to advise longer stillage time for settlement or whether the contents would be more suited for the drain and early return.

The most difficult scenario is where your local trade is clear, wholesome and flavourful whilst that in some distant outlet is cloudy and offensive. An early conclusion to this evidence is that the publican is at fault and deserving of basic instruction in the craft.

Not uncommonly, however, more than one distant outlet may report the same problem and here your conclusion is that some mishap has occurred in transit. Excluding poor practice by your wholesaler in neglecting temperature control, stock rotation or blatant re-racking it may be necessary to look at your preparation for distant delivery.

Two liable features of beer are likely to suffer with transit – finings and yeast. Both affect

clarity and flavour and can result in spoilage. Finings have a finite number of settlements they may achieve and will exhaust if the cask is relocated too much.

Minimising the transit stops is one issue here and best addressed by agreement with your wholesaler. Finings dosing is another and requires a more rigorous check in the brewery before you prepare the cask for release.

Rather than just observing the settlement in tubes dosed with different levels of finings invert the tubes up to six times to see how the settlement repeats itself each time. Y our initial selection of additions may well be different than that after repeated disturbance. Whatever your choice, use only fresh finings. Old stock may be less effective, or worse, have a low level of microbial contamination. 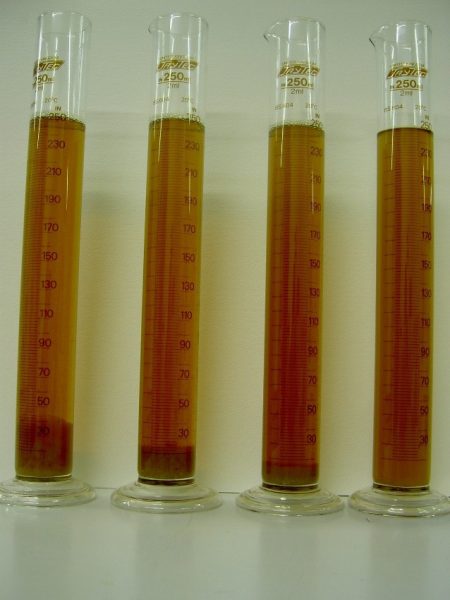 While finings may be anticipated yeast is a more difficult issue and one subject to more unknown effects. Tests show that yeast is very sensitive to physical stress. Pumping beer easily burst cells but simple vibrations may cause damage. Simple movement of yeast in a delivery vehicle may have a small effect. Ultrasonics are more extreme. When sonication is directed at yeast in the laboratory cell material is rapidly released, the cells die and yeast bite appears in the beer. The possibility of vehicles producing ultrasonics has not been investigated but could be feasible and may even be a variable factor according to the position of cask on the vehicle.

Temperature is another variable factor on vehicles. Few of us can afford temperature- controlled delivery and so suffer temperature fluctuations during delivery runs. While these won’t heat the bulk of beer in a cask, a warming of the metal will transfer heat directly to yeast sediment lying in its base. Ensuring that your casks are chilled before loading may alleviate this to some extent but the longer your delivery run the greater the danger. Using freshest yeast for any brews to be sold at a distance is an added precaution.

Transit may also expose casks to microbiological contamination by shaking loose shives and keystones. Catastrophic failure will be obvious but a persistent leak may not be seen on delivery and can introduce dust and dirt as well as oxygen. All are ingredients contributing to undesirable flavours which may then vary from cask to cask. Plastic shives and keystones are said to be more easily loosened by internal cask pressures, but wood is more easily distorted. A flat mallet and an even strike may be important to reduce this variability.

Distance deliveries may also work in reverse by bringing contamination back to the brewery. Unusual microbes from a distant location may well adhere to your cask and, if not cleaned on return, spread into your brewery.

Cleaning your vehicle clean is perhaps well down the list of desirable activities but does also limit contamination of containers. Joint use of transiting spent grain and delivering beer aren’t incompatible but need some degree of separation and management.

While many of these options are speculative and unlikely in any one delivery, they are possible and represent aspects to be anticipated and minimised if you are looking to expand your trade into distance delivery.

Home sales have the advantage of accessibility but may limit your long-term prospects for growth. Distant sales widen your market but also your liabilities. With ever increasing transport costs and the hazards of maintaining beer quality local sales may be an easier market. Whatever your choice production and preparation deserves targeting to minimise those problem calls from a distance.